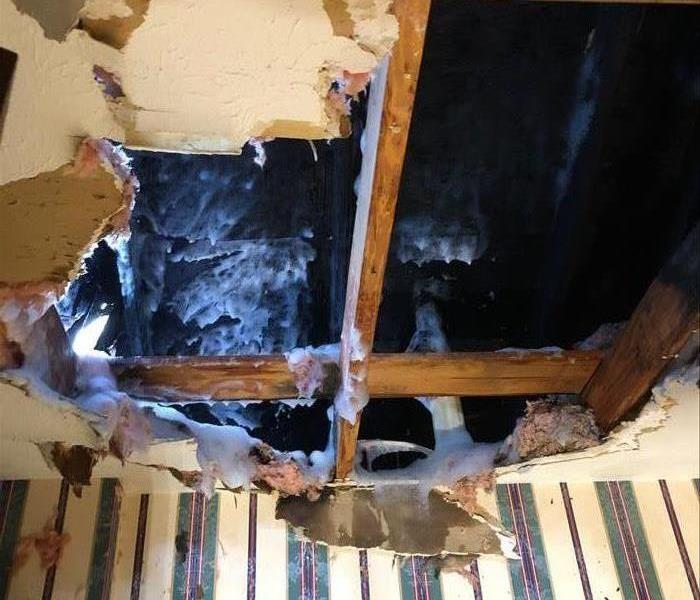 In June of 2020 Randy Barnett, SERVPRO of East Louisville Marketing Manager, received a call from a State Farm Agent telling him that his neighbors house was on fire. Randy told him he didn’t live far from there and he was on his way. As Randy approached the scene the family, and the agent, were standing in the driveway while the fire department got the fire under control. When Randy approached the family they were visibly upset and overwhelmed with the disaster situation happening before their eyes.

Randy handed them a fire pack we keep on hand for this very reason containing bottled water, toiletries, and other essentials they would need for the night.

SERVPRO of East Louisville contacted our board up specialist and dispatched him to the scene to be ready when the fire department released the property as safe to enter. Upon entering the home it was discovered that the fire had started from an exhaust fan in the hall bathroom that had overheated. SERVPRO instructed them to remove essential items and clothing in which we bagged and immediately took them to our shop to be cleaned in our Esporta cleaning system.

For the next six months Randy watched the home go through the mitigation and reconstruction all the way through to the final walk through of the property. Unfortunately, Mr. Smith passed away from Covid before he was able to move back in making an already stressful situation even more difficult for Mrs. Smith. That’s when our construction manager showed up on the final day with flowers and presented them to her.

SERVPRO received a call from the daughter telling us how much the flowers meant, but above all else, how much she loved her newly finished home. It didn’t take long to realize how important our job is to other people. SERVPRO of East Louisville will continue to help people like Mrs. Smith for many years to come.